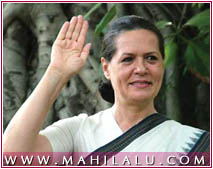 Sonia Gandhi was born on Dec 9, 1946 in Ovassanjo, 80 km away from Turin, Italy. Sonia Gandhi original name is Sonia Maino.sonia father name is Stefano Eugene Maino and her mother Paola Maino. Early education in a Roman Catholic school run by the Salesian Order. Sonia attended an interpreter’s school where she studied English, French and Russian. A two-year certificate course in English language at Cambridge, UK. Sonia   has a diploma in conservation of oil paintings from the National Museum in New Delhi.Sonia and Rajiv Gandhi were married in 28th Feb, 1968. Sonia Gandhi had two children her son name is Rahul Gandhi and Daughter Priyanka Gandhi Vadra.

Sonia Gandhi officially took charge of the Congress party in 1998 and was elected to parliament in 1999. Sonia Gandhi Was first elected as a Member of Parliament to the 13th Lok Sabha from the Amethi Parliamentary Constituency of Uttar Pradesh in 1999, getting 67% of the polled votes. Sonia has been elected to the 14th Lok Sabha from the Rae Bareily Constituency of Uttar Pradesh. On 18 May 2004, after her Congress party won the Indian election, she was slated to become Prime Minister, but declined after fierce opposition and the promise of future turmoil from the defeated right wing.

Sonia Gandhii also serves as the Chairperson of the ruling United Progressive Alliance in the Lok Sabha and the leader of the Congress Parliamentary Party. Sonia Gandhi is an influential person in Indian politics, Sonia was named the third most powerful woman in the world by Forbes magazine in the year 2004 and was ranked 6th in 2007. Sonia resigned her membership to the Indian parliament in 2007, Sonia Gandhi returned to the Lok Sabha after winning the by-election for Rae Bareilly by a record margin of over 400,000 votes. Sonia was also named among the Time 100 most influential people in the world for the years 2007 and 2008.