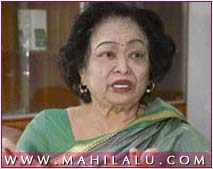 Shakuntala Devi is a well-known mathematical genius and calculating progidy from India. Shakuntala Devi who was born on November 4, 1939 in the city of Bangalore Karnataka state India, Read on this biography to know more about the life history of Shakuntala Devi. Her father worked in a circus as a trapeze and tightrope performer, and later as a human cannonball. Her calculating gifts first demonstrated themselves while she was doing card tricks with her father when she was three. Gradually, over the years, Shakuntala’s memorizing and calculating skills were strengthened, whilst she simultaneously became an expert in complex mental arithmetic.

Shakuntala Devi has been nicknamed ‘Human Computer’ because of her extraordinary talent and skill in solving complex mathematical problems without any mechanical aid. Shakuntala started displaying her talents from a very young age with her brilliant mind; Shakuntala Devi was adept at solving arithmetical problems, including functions of addition, multiplication, division, calculating square and cube roots, along with complex algorithms and Vedic Maths.

In 2006 she has released a new book called In the Wonderland of Numbers with Orient Paperbacks which talks about a girl Neha and her fascination for numbers. Shakuntala Devi can tell the day of the week of any given date in the last century in a jiffy. Shakuntala Devi received guiness book of world record for her outstanding performance. Shakuntala Devi has written numerous books, some of which are – Fun with Numbers, Astrology for you, Puzzles to Puzzle You, and Mathablity.