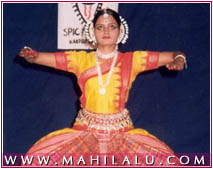 Sonal Mansingh is one of the finest classical dancers of the country, who has made her mark in the field of Dance. Dr. Sonal Mansingh was born in Mumbai 1944. Sonal’s mother was a pious lady, who had a love for creative art. Sonal Mansingh is a multifarious personality. Sonal is best known for her Odissi dance; she is a social eformer, philosopher, examiner, speaker, choreographer and trainer too. Sonal aggrandized her dance by acquiring the different strands of Odissa culture. Sonal has been highly acclaimed for her mastery over the dance of Odissi. She is prominent for dance of Odissi, but Bharatnatyam, Kuchipudi, and Chhau Classical Dances also make her dancing style.

She started learning Manipuri dance at age four, along with her elder sister, from a teacher in Nagpur, then at age seven she started learning Bharatnatyam from various gurus belonging to the Pandanallur school including Kumar Jayakar in Bombay She has “Praveen” and “Kovid” degrees in Sanskrit from Bharatiya Vidya Bhavan and B.A. Hons degree in German Literature from Elphinstone College, Bombay. Dr. Sonal Mansingh grandfather was Mangal Das Pakvasa, a freedom fighter, and one of the first five Governors of India. Dr. sonal mansingh was born second of three children to Arvind and Poornima Pakvasa, a noted social worker from Gujarat and Padma Bhushan winner in 2002.

Though, her real training in dance started when at age 18, despite her family’s opposition, she went to Bangalore, to learn Bharatanatyam from Prof. U. S. Krishna Rao and Chandrabhaga Devi at age 18, and later started learning Odissi from Guru Kelucharan Mohapatra in 1965.Dr. Sonal Mansingh dancing career started in 1962, after her arangetram in Mumbai, and in 1977, she founded, Centre for Indian Classical Dances (CICD) in New Delhi. The organization has been working to promote performing arts and nurturing the cultural legacy of India. It has produced many stage presentations and trained thousands of students.

The Padma Bhushan (1992), Sangeet Natak Akademi Award in 1987 and the Padma Vibhushan in 2003 India’s the second highest civilian award making her the first woman dancer in India to receive such an honour. To mark the completion of her 40 years in dancing in 2002, noted Hindi film director, Prakash Jha made a documentary film on her; title Sonal, which also won the National Film Award for Best Non-Feature Film for the year 2002.