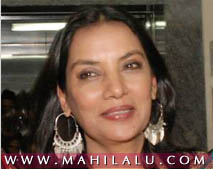 Shabana Azmi was born on September 18, 1950 in New Delhi, India. Shabana Azmi’s father was renowned poet Kaifi Azmi and her mother Shaukat Azmi is a Urdu writer who is also a stage actress. Her brother, Baba Azmi, is a cinematographer. Shabana is one of the leading actresses of parallel cinema. Shabana Azmi was born in a Muslim family. Her parents had an active social life, and their home was always throbbing with people and activities. Shabana was  completed a graduation degree in Psychology from St. Xavier’s College, Mumbai, followed by a course in Acting at the Film and Television Institute of India (FTII), Pune. Shabana topped the list of successful candidates of 1972. Shabana is married to Indian poet Javed Akhtar on 9 December 1984.

Shabana first movie to be released was Shyam Benegal’s Ankur in 1972. Shabana first film was an art film, made by Khwaja Ahmad Abbas, Faalsa, it is released in 1974. She received the national awards consecutively for three years from 1983 to 1985 for her roles in movies, Arth, Khandhar and Paar. Another film named Godmother in the year 1999 brought her another national award taking her tally to five national awards. Shabana also did many roles in experimental and parallel Indian cinema. Shabana’s debut to the small screen began with her acting in a soap opera with a cause, Anupama, that is, the unique or the unparallel.

Shabana did the role of a modern Indian woman who while endorsing the traditional Indian ethos and values negotiated more freedom for herself. Shabana had also participated in many stage plays, and notable among them include M. S. Sathyu’s Safed Kundali in 1980, which was a version of the Caucasian Chalk Circle; and Farouque Shaikh’s Tumhari Amrita, which ran almost five years. It was Akhtar’s second marriage, the first being with the Bollywood scriptwriter, Honey Irani. Kaifi Azmi, a renowned Indian poet and writer of Urdu is her father. Her mother Shaukat Azmi is a well-known stage actress. Her brother is Baba Azmi; Farah Naaz and Tabu are her nieces.