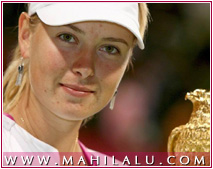 Maria Yuryevna Sharapova was born on April 19, in the year 1987. Sharapova was born to Yuri and Elena, ethnic Russians, in the town of Nyagan in Siberia, Russia. Age 6, Sharapova attended a tennis clinic in Moscow run by Martina Navratilova, who noted Sharapova was talented but required professional training, recommending the Nick Bollettieri Tennis Academy in Florida. Sharapova and her father, neither of whom could speak English, moved to Florida in 1994. Sharapova developed rapidly at the academy and began playing junior tournaments.

Sharapova turned professional in 2001, although she played just one tournament, on the ITF Circuit, that year.Sharapova also won three titles on the ITF Circuit and played her first matches on the main WTA Tour, including winning a match at the Tier I Pacific Life Open in Indian Wells, California before losing to Monica Seles in the second round. Sharapova started playing tour events full-time in 2003. Sharapova finished the year ranked World No. 32 and was named the WTA Newcomer of the Year. At the tournament in Birmingham, United Kingdom on grass, she reached the semifinals of a main tour event for the first time, defeating top seed and World No. 15 Elena Dementieva en route for her first win over a Top 20 player.

Sharapova finished 2004 ranked World No. 4 and was the second-ranked Russian behind Anastasia Myskina. She won her first Grand Slam title, at Wimbledon. Her five titles during the year trailed only Lindsay Davenport’s seven and equalled Justine Henin’s total. Sharapova also topped the prize winnings list for the year.Sharapova lost in the second round of the Tier I Toray Pan Pacific Open in Tokyo. During the spring clay court season leading up to the French Open, Sharapova lost in the third round at both the Qatar Telecom German Open in Berlin and the Internazionali BNL d’Italia in Rome, which were both Tier I events

Sharapova is known for on-court “grunting”, which reached a recorded 101 decibels during a match at Wimbledon in 2005. She has maintained that grunting is an element of her game. She faced criticism for it though, from fellow competitor Elena Dementieva and Judy Murray, mother of Andy, at Wimbledon that year. Monica Seles, a notorious grunter, came to her defence, saying that the noise produced is involuntary and a part of women’s tennis. Sharapova also played very few tournaments in this time because of injury, she had fewer points to defend than Davenport and therefore rose to the World No. 1 ranking on August 22, 2005. She was the first Russian woman to hold the position. Sharapova saved five match points before Clijsters won the match on the sixth match point. Nevertheless, the points she accumulated at the US Open meant that she once again leapfrogged Davenport to take the World No. 1 ranking on September 12, 2005, retaining it for six weeks before relinquishing it again to Davenport following the Zurich Open.

Sharapova finished 2006 ranked World No. 2 and, for the second year, as the top Russian player. She won the US Open and three Tier I titles, more than any other player. Her total of five titles was second only to Justine Henin’s six. Sharapova claimed her first title of 2006 and eleventh of her career at the Tier I Pacific Life Open in Indian Wells, California, defeating Elena Dementieva in the final. Sharapova then lost to Svetlana Kuznetsova in the final of the Tier I NASDAQ-100 Open in Key Biscayne, Florida.Sharapova beat fellow Russian and defending champion Nadia Petrova to take her fifth title of 2006 and the 15th title of her career.

Sharapova ended 2007 ranked World No. 5, the fourth consecutive year that she finished in the top five. Sharapova was the top seed at the Australian Open because of World No. 1 Justine Henin’s withdrawal. Sharapova’s first summer hardcourt tournament was the Tier I Acura Classic in San Diego, California, where she won her first title of the year, fifth Tier I career title, and 16th singles title of her career by defeating Schnyder in the final. Nevertheless, she clinched the US Open Series for the first time. She is often able to produce an ace or a service winner or provoke a weak reply from her opponent, which allows her to take control of the rally immediately. A serious shoulder injury in early 2007, however, reduced the effectiveness of her serve for several months, as she routinely produced eight to ten double faults in many of her matches during this period

Sharapova completed an abbreviated 2008 season winning three titles, maintaining an undefeated record in tournament finals and a win-loss record of 32–4.Sharapova was the fifth-seeded player at the Australian Open. This injury prevented Sharapova from playing again in 2008, missing both the Beijing Olympics and the US Open. On September 26, she announced on her website that she will be taking the rest of the year off, thus missing the year-ending Sony Ericsson Championships. Sharapova finished 2008 ranked World No. 9. Sharapova is thought to have good speed around the court, especially considering her height.

At the beginning of 2008, some observers noted that Sharapova had developed her game, showing improved movement and footwork and the addition of a drop shot and sliced backhand to her repertoire of shots. Her serve appeared to be more effective at the 2008 Australian Open, as she produced just 17 double faults in seven matches while winning the tournament. Her serving problems resurfaced, however, during the spring of 2008, as she produced 43 double faults in just four matches at the French Open and eight double faults during her second round loss at Wimbledon.