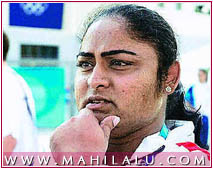 Malleswari is a recipient of the Rajiv Gandhi Khel Ratna award, India’s highest sporting honour for the year 1995-1996. Malleswari is also a recipient of the civilian honour Padma Shri in 1999. Malleswari is awarded the Arjuna Award in 1994, India’s highest award in sports. In 1995, Malleswari won the world weightlifting title in her class 54 kg with a new record, by lifting 113.0 kg in the clean and jerk. Malleswari, who went on to win the contest’s gold medal, beat the previous record of 112.5 kg set by China’s Long Yuling in December 1993. She also won the 1995 Asian championship.

Malleswari broke her own records in the Senior National Weightlifting Championship in 1997, and India’s first medal, weightlifting silver, in the 1998 Asian Games. Malleswari was married in 1997 and took a break from competitive weightlifting, to return in 1998 for the Bangkok Asian Games. However, she struggled with her weight thereafter, and was unable to win a medal at the 1999 Athens World Weightlifting championships.There was contention over the choice of weightlifters for India’s Olympic team. With three contestants and two spots, there was criticism when Kunjarani Devi was left out. However, Malleswari’s bronze validates her selection.

Some of the achievements of Malleshwari are as follows: