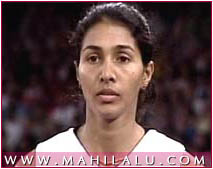 P.T. Usha is one of India’s best-known athletes; she was born in a poor family to E.P.M.Paithal and T.V. Lakshmi in June 27th 1964 in the village of Payyoli, Kozikode District, kerala, India. P.T.Usha has been Associated with Indian Athletics since 1979 from the state of Kerala and is regarded as queen of Indian track and field. Her Original name was Pilavullakandi Thekkeparambil Usha but she was popularly known and called as P.T.Usha. She was nicknamed Payyoli Express. In 1976 the Kerala State Government started a Sports School for women, and Usha was chosen to represent her district. In 1985, she was conferred the Padma Shri and the Arjuna award. With heels on fire she swayed like a swift tiger on the track, inspiring every Indian girl to achieve what they dream. Read the life of a successful Indian woman who inspired millions to achieve new grounds in the field of sports.

She emerged a winner by becoming the first Indian sports women to enter the Olympics final at the age of twenty.P.T.Usha became the first Indian woman and the fifth Indian to reach the final of an Olympic event by winning her 400 m hurdles Semi-final. In the 10th Asian Games held at Seoul in 1986, P. T. Usha won 4 gold and 1 silver medal in the track and field events. Mr.Nambiar noticed P.T.Usha when she participated in National School Games in the year 1979 and coached her throughout her career. Her debut in the 1980 Moscow Olympics proved lackluster.  In the 1982 New Delhi Asiad, she got silver medal in the 100 m and the 200 m, but at the Asian Track and Field Championship in Kuwait a year later, Usha took gold in the 400 m with a new Asian record. Between 1983-89, Usha garnered 13 gold’s at ATF meets.

She finished first in the semi-finals of the 400 meters hurdles in the 1984 Los Angeles Olympics, but faltered in the finals. In almost a repeat of Milkha Singh’s 1960 feat, there was a nail-biting photo finish for the third place. Usha lost the bronze by 1/100th of a second. She won five gold medals at the 6th Asian Track and Field Championship at Jakarta in 1985.Her six gold medals at the same meet is a record for a single athlete in a single international meet.

P.T Usha’s marital life did not become a hurdle for her interest in athletics. She was blessed with a fine and understanding husband who accompanied her in every walk of life. In 1991 Usha married V Srinivasan, a sub-inspector in the Central Industrial Security Forces. and their son Ujjwal was born the following year. However, she was soon back on the tracks. She was frequently criticized and teased on the field for her return at the age of 28 although in European countries athletes run at the at the age of 40. The only support at the moment was her husband and family members. At the age of 34, she astonished the country by winning bronze medals in the 200 m and 400 m at the Asian Track Federation meet at Fukkowakka in Japan.

P.T Usha retired in the year 2000, with a promise to groom bright young talents in her sports school in Kerala called ‘Usha School of Athletics’. Although her sports school has found its fame in these years her retiring statement ‘I am retiring as a sad athlete’ had a very painful note that was submerged by the mighty power.