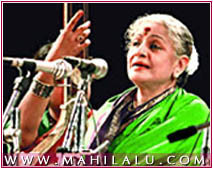 Madurai Shanmukhavadivu Subbulakshmi Popularly known as M.S. or M.S.S. was born in september16th 1916 and Subbulakshmi died on December 11, 2004 after a brief illness, due to complications relating to pneumonia and cardiac irregularities. M.S.Subbhalakshmi was a renowned Carnatic Vocalist.  She was the first musician ever to be awarded the Bharath Ratna, India’s highest civilian honor. She bagged several awards like the `Isai Vani’, `Sangeet Kalanidhi’ at the state level, `Padma Bhushan’, `Padma Vibhushan’, the Ramon Magsaysay award at national and international levels.

Subbulakshmi was born in the temple town of Madurai, Tamil Nadu, India to Shanmukhavadivu (Veena Vidwan) and Subramanian Iyer, a lawyer, in a devadasi musical family. They had three children. People fondly called MS, `Kunjamma’. MS ruled the world of carnatic music for several decades. MS was instrumental in taking this art form out of India and across the world. She started learning Carnatic music from an early age. She performed a vast variety of musical forms in different languages including Tamil, Telugu, Sanskrit, Hindi, Malayalam, Kannada, Bengali, Gujarati and Marathi. After the death of her husband Sadasivam in 1997, she stopped all her public performances.

M.S.Subbulakshmi traveled to London, New York, Canada, the Far East, and other places as India’s cultural ambassador. She gave many concerts in different parts of the world; her concerts at Carnegie Hall, New York, the UN General Assembly on UN day in 1966, the Royal Albert Hall, London in 1982, and at the Festival of India in Moscow in 1987 were significant landmarks in her career. One of the greatest classical vocalists of her times, M S sang only for charity for a number of years.

M.S. also acted in a few Tamil films in her youth. Her first movie “Sevasadanam” was released in 1938. MS Subbulakshmi also played the male role of Narada in “Savitri” which released in the year 1941 to raise money for launching Kalki, her husband’s nationalist Tamil weekly. Her title role of the Rajasthani saint-poetess Meera in the eponymous film in the year 1945 gave her national prominence. This movie was re-made in Hindi in 1947. The movie had M.S Subbulakshmi sing the famous Meera bhajans, with Dilipkumar Roy as the music director. Later, she quit films and turned wholly to concert music.

M.S. met T.Sadasivam, a freedom fighter who is a follower of Rajaji in the year1936. She stayed with Sadasivam during this period until their marriage in 1940 upon the demise of Sadasivam’s first wife. This was a period in which she was in a quandary as to whether she should marry GNB, the handsome and brlliant musician or Sri. Sadasivam.

She chose Sri Sadasivam as her husband and her marriage spanned almost 60 years, in which Sadasivam shaped MS’s career like a master craftsman. M.S Subbalakshmi and sadasivam had no children of their own. But sadasivams previous marriage children’s Radha and Vijaya were blessed by the motherly love showered on them by Subbulakshmi.

Subbulakshmi first recording was released when she was 10 years old. She gave her first public performance during the Mahamaham festival at Kumbakonam at the age of sixteen. She began her Carnatic classical music training under Semmangudi Srinivasa Iyer and then Hindustani classical training under Pandit Narayan Rao Vyas. By the age of 17, Subbulakshmi was giving concerts on her own, including major performances at the Madras Music Academy, a prestigious centre for the study and promotion of Carnatic music. Performance in Carnatic music concerts was until then, a domain, traditionally reserved for men. In 1969 she was accompanied by Indian Railways Advisor SN Venkata Rao to Rameshwaram, where she famously sang several songs in front of each idol in the Rameshwaram temple. M.S and Sadasivam also trained Radha who frequently sang with M.S. in concert while Vijaya played the Tanpura. Radha became a vital force in MS kutcheris and accompanied her for almost 50 years till illness prevented her from doing so.

MS had a lasting impression on commoners through songs like ‘ Vaishnava Janato’ and Hari tum haro’. She was solely responsible for popularizing kritis of Annamacharya, the Vishnu Sahasranamam, Venkatesa Subrapatham and Kurai onrum illai, to name some of her songs.

M.S.Subbulakshmi was widely honored, praised and awarded. She was honored as the court-singer of Tirumala Tirupati Devasthanams. She was bestowed with enormous prize moneys with these awards; she donated most of them to charity. She was awarded honorary degrees from several Universities.

She received Padma Bhushan in 1954.

Sangeetha Kalanidhi in the year 1968.

The Indira Gandhi Award for National Integration in 1990.

Sadly, Sadasivam did not live to see his wife receive the highest national award, the Bharat Ratna, from the hands of the then President of India K R Narayanan.

The Nightingale fell silent on the night of December 11, 2004. M S Subbulakshmi passed away around 11.30 pm at St. Isabel’s Hospital in Chennai on Saturday, brining the curtain down on a glorious chapter in the history of Carnatic music. Her demise has cast a pall of gloom on the world of Carnatic music. MS may have gone, but her music will live forever.