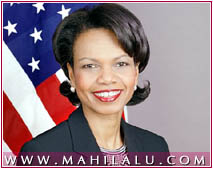 Condoleezza Rice was born in Birmingham, on November 14th, 1954. Her father’s name is John Wesley Rice, who was a school guidance counselor during the week days and a Presbyterian minister on the weekends. Her mother’s name is Angelena, was a schoolteacher. Her family lived in a middle-class, black community called Titusville, where education was a high priority for children who were expected to succeed regardless of any prejudices or boundaries.

John and Angelena Rice tried to give everything possible to their young daughter, providing insubstantial support by developing her sense of pride, faith, and responsibility. “They wanted the world,” Connie Rice who is the second cousin to Rice said in a biography by Antonia Felix entitled Condi : The Condoleezza Rice Story. “They wanted Rice to be free of any kind of shackles, mentally or physically, and they wanted her to own the world. And to give a child that kind of entitlement, you have to love her to death and make her believe that she can fly”.

At the age of 15, Rice graduated from high school and joined University of Denver, to become a concert pianist. She won a young artist’s competition and was invited to play Mozart’s Piano Concerto in D Minor with the Denver Symphony Orchestra. Although she was a talented performer, she knew that the competition for professional performers was stiff. Partway through college, she decided she would never become a concert pianist. She took a course called “Introduction to International Politics.” Her professor, Dr. Josef Korbel, a Soviet specialist and the father of Madeleine Albright who later became secretary of state under President Bill Clinton, inspired her. She changed her mindset to political science. Rice was a brilliant student, and in 1974, she earned her bachelor’s degree in political science at age 19 only. She was awarded the Political Science Honors Award for “outstanding achievement and promise in the field of political science.” Later she joined in Master’s degree in government and international studies at Notre Dame University in just one year. She returned to Denver, unsure of what to do next.

“I thought I had a job as executive assistant to a vice president of Honeywell,” she told Nicholas Lemann in the New Yorker. “Before I could go to work, they reorganized, and I lost the job.” She taught piano lessons and applied to law school. Then, when she was down at the university, Dr. Korbel recommended that she take some classes. By 1981, she had received her Ph.D. in international studies from the University of Denver.

At Stanford’s Center she was awarded a fellowship for International Security and Arms Control. It was the first time the Center had ever admitted a woman. The fellowship was supposed to be for one year, but Rice made a big impression and was offered a job as an assistant professor of political science at Stanford University, which she accepted. In her classes, Rice often used football analogies in her lectures, comparing war to football. Her classes became very popular and attracted many athletes.

Rice attended a faculty seminar in 1984 where Brent Scowcroft, who was the head of President Reagan’s Commission of Strategic Forces, spoke on arms control. During the dinner following the seminar, Rice asked Scowcroft some challenging questions. Scowcroft was very impressed. “I thought, This is somebody I need to get to know. It’s an intimidating subject. Here’s this young girl, and she’s not at all intimidated,” he told the New Yorker’s Lemann. Scowcroft began arranging for her to attend seminars and conferences. She was appointed as the special assistant to the Director Joint Chiefs of Staff position at the Pentagon through a Council on Foreign Relations Fellowship in 1986. In 1989, when Scowcroft became National Security Advisor, he appointed Rice to the National Security Council as the chief authority on the Soviet Union. She was involved in forming the American reaction to the fall of the Berlin Wall, the dissolution of the Warsaw Pact, and the demise of what was then considered the Soviet Union.

During this time period, Rice had been doing a lot of writing. In 1984, she published Uncertain Allegiance : The Soviet Union and the Czechoslovak Army 1948-1963. She also wrote The Gorbachev Era with Alexander Dallin in 1986. Rice joined the Board of Directors of the Stanford Mid Peninsula Urban Coalition in 1986. The organization provided vocational and academic assistance to minority students at high risk of dropping out of high school.

In 1991 she returned to Stanford. She was appointed to the board of directors of Chevron. She apparently served them well, as they named a tanker after her in 1993, and she went to Rio de Janeiro to christen it. She also served on the boards for Trans America Corporation and Hewlett Packard.

In July of 1999, she took a leave of absence from her provost position to become the foreign policy advisor for Texas Governor George W. Bush’s presidential campaign. When Bush won the election, he tapped Rice for the position of National Security Advisor. As National Security Adviser, Rice has to balance some strong personalities and viewpoints and pull all of the information together for the president.

On September 11, 2001, Rice immediately recognized the planes striking the World Trade Center as a terrorist attack. She called a meeting of the National Security Council. When a plane hit the Pentagon, they were ordered to evacuate the White House and take shelter in an underground bunker. She made calls throughout the day to heads of state throughout the world, assuring them that the United States government was up and running. She was suddenly thrust into the spotlight, as the Bush administration evaluated their next steps.

Rice is very dedicated to her physical fitness and gets up at 5 a.m. to exercise. She has never married, has no brothers or sisters, and her parents have passed away. Her job is the main focus in her life, and she regularly works 15-16 hour days. She relaxes by playing the piano. Her faith is strong, and she prays every night and sometimes during the day as well. She is passionate about football and often states that she would someday like to become the commissioner of the National Football League.