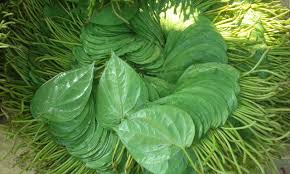 Betel leaves are used in prayers and religious ceremonies. They are also used to eating it in the form of a ‘paan’. Betel leaves has many medicinal, curative and healing health benefits. They contain many vitamins like vitamin C, thiamine, niacin, riboflavin and carotene and are a great source of calcium.

Betel leaf is called as ‘Paan Ka Patta’ in hindi, while in Telugu it is usually called as ‘Tamalapaku’. It is heart-shaped and was used as a medical treatment since many years ago. In India betel leaves consumed after meals as paan.

Betel leaves play an important role in detoxification of blood and providing antioxidant nutrients. These betel leaves to promote cardiovascular function and acts as a great anti-inflammatory. It is also a good purifying function to the body.