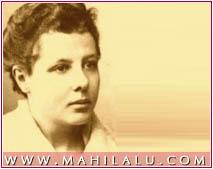 Annie Besant, was born on 1st October 1847 to William Wood and Emily Morris. Annie Besant’s father is a doctor, died when she was at only five years old. Without any savings, Annie Besant’s mother found work looking after boarders at Harrow School. Mrs. Wood was unable to care for Annie and she persuaded a friend, Ellen Marryat, to take responsibility for her upbringing.

In the year 1866 Annie met the Rev. Frank Besant at the age of nineteen, Annie Besant decided to marry the young clergyman. By the time she was twenty-three Annie had two children. However, Annie was deeply unhappy because her independent sprit clashed with the traditional views of her husband. Annie also began to question her religious beliefs. When Annie refused to attend communion, Frank Besant ordered her to leave the family home. A legal separation was arranged and Digby, the son, stayed with his father, and Mabel went to live with Annie in London.

After separation from her husband Annie Besant completely rejected Christianity and in the year of 1874 joined the Secular Society. Annie soon developed a close relationship with Charles Bradlaugh, who was an editor of the radical National Reformer and head of the secular movement in Britain. Bradlaugh gave Annie a job working for the National Reformer and during the next few years wrote many articles on issues such as marriage and women’s rights.

In the year of 1877 Annie Besant and Charles Bradlaugh decided to publish The Fruits of Philosophy, Charles Knowlton’s book advocating birth control. Besant and Bradlaugh were charged with publishing material that was “likely to deprave or corrupt those whose minds are open to immoral influences”. In court they argued that “we think it more moral to prevent conception of children than, after they are born, to murder them by want of food, air and clothing.” Besant and Bradlaugh were both found guilty of publishing an “obscene libel” and sentenced to six months in prison. At the Court of Appeal the sentence was quashed.

In 1880 Charles Bradlaugh was elected as MP for Northampton, but as he was not a Christian he refused to take the oath, and was disqualified from the House of Commons. As well as working with Bradlaugh, Besant also became friends with socialists such as Walter Crane, Edward Aveling and George Bernard Shaw.

After joining the Social Democratic Federation, Annie started her own campaigning newspaper called The Link. Like Catherine Booth of the Salvation Army, Annie was worried about the health of young women workers at the Bryant & May match factory. On 23rd June, 1888, Annie published an article White Slavery in London where she drew attention to the dangers of phosphorus fumes and complained about the low wages paid to the women who worked at Bryant & May.

Three women who provided information for Annie’s article were sacked. Annie responded by helping the women at Bryant & May to form a Matchgirls Union. After a three week strike, the company was forced to make significant concessions including the re-employment the three victimized women.

In 1889 Besant also joined the socialist group, the Fabian Society and contributed to the influential book, Fabian Essays. Apart from Besant, the book included articles by George Bernard Shaw, Sydney Webb, Sydney Olivier, Graham Wallas, William Clarke and Hubert Bland and the book was edited by Shaw, and the book sold 27,000 copies in two years.

Annie Besant was elected to the London School Board in 1889. After heading the poll with a fifteen thousand majority over the next candidate, Besant argued that she had been given a mandate for large scale reform of local schools. Some of her many achievements included a programme of free meals for hungry children and free medical examinations for all those in elementary schools.

In the 1890s Annie Besant became a supporter of Theosophy, a religious movement founded by Madame Blavatsky in 1875. Theosophy was based on Hindu ideas of karma and reincarnation with nirvana as the eventual aim. Annie Besant went to live in India but she remained interested in the subject of women’s rights.

In 1898 she founded the Central Hindu College at Benares now it is Varanasi and she received a degree in Sanskrit literature, English literature and Indian history from this institution. She continued to write letters to British newspapers arguing the case for women’s suffrage i.e. voting rights and in 1911 was one of the main speakers at an important Suffrage rally in London.

While in India, Annie joined the struggle for Indian Home Rule, and in 1916 established the Indian Home Rule League and became its president. She was president of the Indian National Congress in 1917, but later split with Gandhi. At times during the First World War was interned by the British authorities.

President of the Theosophical Society from 1907, she wrote a huge number of books and pamphlets on theosophy. She traveled 1926-1927 in England and the United States with her protege Jiddu Krishnamurti, whom she announced as the new Messiah. However, by 1929 the young man himself denounced all claims about himself as the World Teacher. Annie Besant died in India in 1933 at the age of 86.