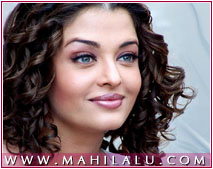 Aishwarya was born into a traditional south Indian family and started modeling at a young age. Aishwarya Rai (Ash) is one of Bollywood’s pre-eminent leading ladies. This Indian darling burst upon the world stage when her striking beauty, poise and commanding intelligence won her the Miss World crown in 1994.This green-blue-eyed beauty appeared in advertisements for many prestigious firms. the ones that brought aishwarya into the limelight were the garden sari and the Pepsi ad. Crowned Miss India 1994 runner-up,

Aishwarya was a hot favorite in the run for miss world title, which she won, Aishwarya’s beauty and charm made her India’s darling. Aishwarya stormed into the Indian movie industry, where she has proven herself a brilliant & genuine actress.

Aishwarya was an architecture student before she entered modeling as her part-time job. She was best known for her Pepsi commercial with Mahima Chaudhry. With her green-grey eyes, she was already approached by big names in India’s film industry, where they offered her starring roles. She rejected the film offers since she aimed to be an architect.

With more than 17,000 websites dedicated to her, Aishwarya rai finally launched her Official Website www.AishwaryaWorld.com. Aishwarya rai  became the first Indian female to be immortalized in wax at the world famous Madame Tussaud’s wax museum in London.

Aishwarya rai made her first commercial for Camlin pencils when she was in the 9th grade. Favorite subject in college was Zoology. aishwarya rai Loves collecting watches.